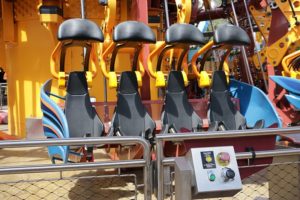 The original May 11 opening date of the StarFlyer has been pushed by 3 weeks. Thrill seekers will have to wait until June 1. The developer, Orlando-based Unicorp National Developments, LLC owns the Vue at 360 complex where the ride will be located. Officials with the company announced a new June 1, 2018 debut. The attraction was expected to open May 11.

Unicorp President Chuck Whittall said that “Kids will be out of school,” at the opening of the new attraction. StarFlyer will be world’s tallest swing ride at 450 feet and two dozen guests at a time will be able to swing at 60 mph. Unicorp President Chuck Whittall said that the reasons for delays include an incomplete railing that will surround the ride, as well as unfinished landscaping features.

The top of the new StarFlyer thrill ride will be 450 feet above International Drive and 50 feet higher than the nearby Orlando Eye, however three feet shorter than the Hyatt Regency Orlando.

StarFlyer will open with a car show and music during an eight-hour party and the opening ceremony that will start at 2 p.m. There will be a contest to ask visitors for the most compelling story will award 12 people a spot on the first ride.