It is the end of the year and it’s time to look back. 2013 was a good year for Orlando Interplex Destination Services and we are proud of it. We released this innovated website and kept working on improving the company’s web presence. We aim to cover the full process of planning a trip and the new website is a proof of that. We hope we made your experience as easy and intuitive as possible. 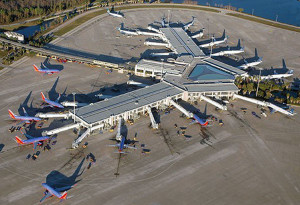 A lot happened not only for our company but for the city of Orlando and its transportation options: END_OF_DOCUMENT_TOKEN_TO_BE_REPLACED

Florida is not the place to go if you want classic snowy Christmas. Yesterday proved it with a new temperature record of 87 degrees measured at Orlando International Airport. The previous record had stood for 85 years – since 1928 – and was 85 degrees. According to the National Weather Service, the next days also have the potential of setting records. Yet Christmas is expected to be a little more chilly (Florida standards) 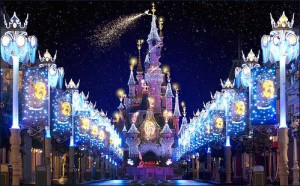 But Christmas spirit is not all about snow. There are also the Christmas lights. According to OrlandoSentinel many people who come from colder states compensate with extreme outdoor decorations. END_OF_DOCUMENT_TOKEN_TO_BE_REPLACED 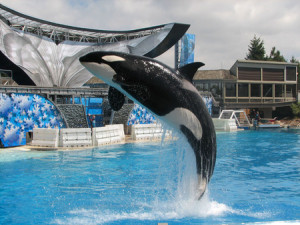 The “Open Letter from SeaWorld’s Animal Advocates” — which appears in today’s Orlando Sentinel, New York Times, Wall Street Journal and USA Today, among other papers — is SeaWorld’s answer to criticisms raised by the CNN film. It doesn’t identifies the “Blackfish” directly but defends the park’s way of caring for its 29 whales SeaWorld President and Chief Executive Officer Jim Atchison said in an interview Thursday that the company decided to respond after several well-known performers backed out of concerts that had been scheduled for early next year at SeaWorld Orlando, most of them citing the “Blackfish” controversy. END_OF_DOCUMENT_TOKEN_TO_BE_REPLACED

No, it not Southwest, even though they are the biggest carrier at Orlando International Airport (MCO), it is confirmed that low budget Allegient beats them, offering  52 different destinations from Sanford International Airport (SFB). They offer a great variety but to small town airports Little Rock, Ark. and Tulsa, Okla. And some of the flights are only available once or twice a week; some are seasonal… 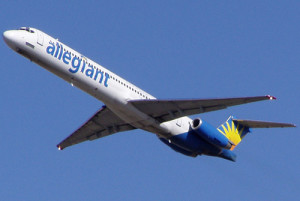 OrlandoSentinel gives more details about the pros and cons of flying with Allegiant, but whatever you choose, make sure one of our chauffeur waiting for you when you land or helping you with your bags when you leave.

Country singer Willie Nelson and rock bands Heart and Barenaked Ladies have canceled their planned performances at SeaWorld in Florida. This comes after CNN’s documentary “Blackfish” – focused on Tilikum, an orca currently held by SeaWorld and the way the park treats animal in captivity. The film had huge impact and many petitions had started after its premiere at the 2013 Sundance Film Festival on 19 January 2013. 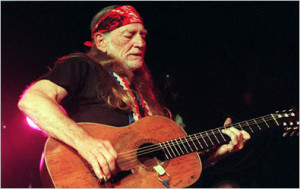 Willie Nelson is the latest act to cancel a concert at Orlando’s SeaWorld in the wake of CNN’s “Blackfish” documentary. The legendary country singer’s decision comes after the Canadian rock band Barenaked Ladies pulled the plug on their show at the Florida theme park. SeaWorld spokesman Nick Gollattscheck confirmed Nelson’s decision not to sing at SeaWorld. But the spokesman said the reasons weren’t tied to the recent documentary on SeaWorld’s captive killer whales and a resulting petition calling on acts not to play SeaWorld. Instead, the Sea World spokesman cited scheduling conflicts in the Nelson cancellation. “I understand there are petitions going around with thousands of people’s names on it, so I had to cancel. Also, I don’t agree with the way they treat their animals. It wasn’t that hard a deal for me,” Nelson is quoted as saying. A posting on Heart’s official Twitter page said the decision was influenced by the recently-released documentary “Blackfish.” “The Sea World show was planned long ago as an Orlando show,” the tweet said.”Had we known, we’d have said no then. We said no today. Love you all.” When the Barenaked Ladies nixed their plans to play at SeaWorld last week, they explained that it was a decision made after viewing “Blackfish.” “This is a complicated issue, and we don’t claim to understand all of it, but we don’t feel comfortable proceeding with the gig at this time,” the band said on a Facebook post. Joan Jett on Monday also joined the list of recording artists distancing themselves from the marine park when she sent a letter to SeaWorld President Jim Atchison asking that the park stop using her song “I Love Rock ‘n’ Roll” as the opening music for its “Shamu Rocks” show. 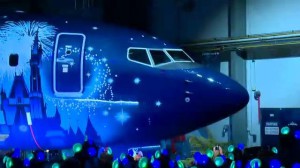 The Canadian airline WestJet introduced its custom-painted aircraft this Monday. The “Magical Plane” comes as result of the collaboration between WestJet, WestJet Vacations and Disney Parks & Resorts. Its first flight between Calgary and Orlando International Airport took off yesterday and brought its passengers for a three-day vacation at Walt Disney World. After that „Magic Plane” will fly on WestJet’s domestic, trans-border and international network, which includes 39 flights per week from various Canadian cities to Orlando. The special livery is designed to tell a story from tail to nose. It starts with Sorcerer Mickey, prominent on the aircraft’s tail, with magic stars coming from his hands. The magic stars swirl around the fuselage and past the wings, culminating with fireworks over the Cinderella Castle at Walt Disney World. Inside, the seats are sprinkled with stars and the plane’s crew will pass out Disney-shaped cookies. According to WestJet, to paint the plane took a team of 26 people working around the clock for 24 days. The design, which features Mickey Mouse as Sorcerer Mickey in the Disney classic Fantasia, includes 36 different paint colors. The paintjob also has a little riddle – both side of the plane are mirror images, except for one detail – it left to the viewer to find out what it is exactly. “It’s a flying billboard,” said Gregg Saretsky, president and CEO of WestJet. “I think it just brings our whole partnership to another level.” WestJet and Disney have been working as partners for nearly a decade and the “Magic Plane” is designed to lead the passenger to Disney before the plane has even landed at Orlando. 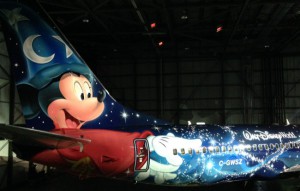 “Families and kids, they’ll be in an airport somewhere and they’ll look out and they will see Sorcerer Mickey,” said Marlie Morrison of Walt Disney Company. “That little bit of Disney magic, you know, just might surprise them anywhere they are at any particular airport.”