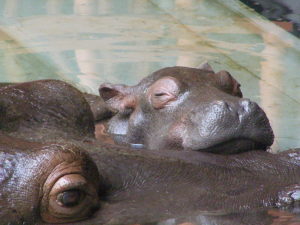 Park officials at Animal Kingdom in Orlando announced Wednesday their baby Nile hippopotamus is a male and his name is Augustus.

The calf was born on January, 13. This is the first hippo born at Animal Kingdom in Lake Buena Vista in more than 13 years, Disney officials say.

Disney didn’t know Augustus’ sex until this week. Usually, a newborn calf weighs between 50 and 110 pounds and a hippo’s sex isn’t known immediately after the birth.

Augustus currently weighs 168 pounds and is often seen staying close to his mom, named Tuma. A video went viral showing Augustus in action, swimming, snoozing and walking around with his mother.

Disney participates in the Species Survival Plan, overseen by the Association of Zoos and Aquariums and this baby hippo Augustus was born as part of the program.

The International Union for Conservation of Nature (IUCN) which monitors the conservation status of species classifies hippos as vulnerable, meaning they are one step away from being considered an endangered species.

Other animals that may be spotted along the attraction include crocodiles, antelopes, hyenas, lions, elephants, warthogs, flamingos, and zebras.