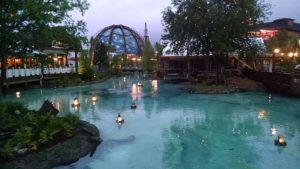 A fleet of drones is lighting up Disney World in a new Christmas show called Starbright Holidays.
Disney is collaborating with Intel Shooting Star which debutes on the U.S. market with the unmanned aerial vehicles designed specifically for entertainment purposes.
Intel’s drone is lightweight, composed of a Styrofoam body and plastics, and it weighs only half a pound each or less than a volleyball. The drone is equipped with four LED lights that can create more than four billion color combinations. The drones can fly for 20 minutes and are allowed to fly at the height of 400 feet. All 300 drones are controlled by one computer and one pilot. Disney says another fleet of 400 drones is waiting to be used.
The designer team has worked on creating the holiday show for more than five months. The new software allows the show to be prepared for only a few days instead of months as it was previously. After the software gets the images, it calculates the number of drones required and the paths of movement so that the drones wouldn’t collide with each other.
The drone production at Disney Springs is the first of its kind in the U.S. and the show of the fleet of drones is touted as more spectacular then fireworks.
The theme park giant got the FAA permission to use the drones only two weeks ago and the approval comes with a four-year waiver.